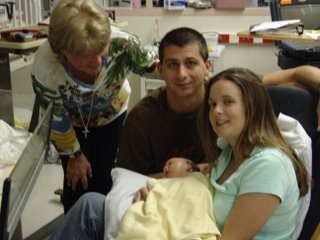 I have fallen a bit behind in my posts 🙁 Let’s see, what all has happened since the last post….

On Friday (a week ago) they moved Casey to what is called the step down room. They have the main room for the sicker babies, but as babies become more stable they are moved to the step down room. When they told us they were moving her we were so happy. The new room is much quieter, not nearly as many alarms going off. Also, there is more space. We are able to pull up rocking chairs and hold her a lot.

The move was perfect timing too. They moved her early Friday morning, and my mom got to town just a few hours later. It was a really nice visit. My mom was so happy to see how much Casey has grown and developed since her last visit.

Casey has been doing really well on her feedings. They started moving up the volume very slowly, but since she was doing so well they sped up the increase a little. She hit her calorie goal yesterday. They have her on what is called a continuous feed. A continuous feed just means that she is basically always being fed. Right now she is getting 20cc every hour. Over the next few weeks they are talking about moving her towards a bolus feed. This will take time and we will have to work our way up to them. The goal will be to have 60cc over a 20-30 minute period then give her 2.5-3 hours off the feeds. We will probably start by giving her 20cc over 50 minutes, 10 minutes off until she adjusts, then slowly move the off period up from there.

Tim and I have been working with all of the nurses to learn as much as we can about her equipment and needs. In the step down room they encourage as much parent involvement as possible. We are giving her medicine through the tube, loading the feeds, cleaning the area, etc. Everyday we try and do a little more. I learn new words everyday too.

Casey’s legs are still very stiff. We had the head of ortho come by this week and take a look to see if there is anything at all that he could do. He did have some ideas, but said that with her stiffness and young age he really wanted to wait until she was at least a few months older. We have also been working with PT and OT as much as we can to help the tone and keep her as loose as we can.

Casey has been coughing lately. This sounds very simple, but it is a HUGE deal. She is able to cough up some of her secretions which means she needs less suctioning. Some of the coughs sound awful, but they are a really big step in the right direction.

Neuro came by this evening while we were up visiting. We talked with him some about what is next for Casey as far as tests and things go. We will be looking to do an MRI soon.

Casey is almost 9 pounds now, she is growing so fast. I can’t believe she will be 7 weeks in just a few days.

I think that’s the main stuff for the past week. She has been doing really well. Everyday she just amazes us more and more. I will try and post more frequently 🙂