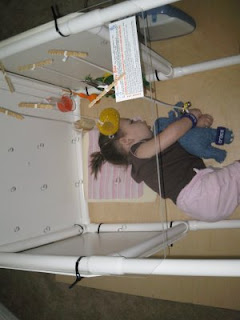 We had a nice surprise yesterday. Casey’s new vision teacher came out to meet Casey and Casey’s ECI manager. We expected just a quick visit to touch base on what Casey’s previous teacher was working on. However when Clair (the new teacher) and Clair’s boss came they had a big bag with them. Early this summer Casey’s previous teacher ordered a Little Room for Casey. We did not expect it for a while. The big bag was a Little Room. They put it together and Casey seemed to really like it. The idea is pretty simple. Basically you want to narrow the field of vision for visually impaired children. Then in the small space you want to surround the child with visually motivating items. Anything that you think would/could motivate the child to reach, watch, or react in any way. Casey hung out in it for a little while. She was looking around a lot and making lots of little sounds. I think over time this will be a great tool for Casey.

We were planning on going to an ECI playgroup this morning. Sadly I think we have to pass. Casey has a bit of an ear infection. She has been up a lot at night and really tired during the day. Even though it’s not contagious I think we will probably just keep her home and let her rest a little more.
Casey’s PT was scheduled to work through next week. She is due later in September. I called and left her a message to cancel Casey’s session this week (due to her ear infection). She did not call back and I found out yesterday that around the time I left her a message she was having her baby. He came a little early. Casey’s PT and her son are both doing well. We would like to say congratulations and welcome.