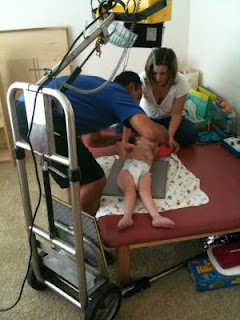 Casey has been having a hard week. She has slowly been getting a little worse each day (since about midweek). She gets plugged into a pulseox (monitors heart rate & oxygen saturation) multiple times through out each day. We have noticed her average heart rate has been going up and her saturation has been going down. In addition we have noticed more frequent low grade fevers. Casey has been really fussy lately, and her secretions have been a bit thick and yellow. All of these are signs of possible trouble.

Usually when Casey starts showing these signs we are sure that she is developing a pneumonia. If we can catch it in time and get her started on antibiotics right away we can usually keep her at home and out of the hospital. I decided to call her pulmonologist this morning.

After I explained what Casey was doing and my concern for a possible pneumonia he wanted to agree. However, with the nasty flu that is out this year, and the fact that Casey’s nurse was sick last week he wants to be sure it is pneumonia and not the flu. The only way to confirm this is an Xray for pneumonia and a flu scan for the flu.

We only have a small window with Casey that we can proactively treat pneumonia. If that window passes her chances of staying home go WAY down. Instead she ends up in the hospital, most likely intubated and in the ICU. We want to avoid that if at all possible.

We called the ER to see what they said. They said that there are a lot of kids there now and depending on how Casey presents compared to the other kids she may sit in the waiting room for hours (4+) before even being seen. Then once she is seen, they can not tell me that the doctor will be open to letting us get her medications and go home. If we take Casey to a hospital she is then exposed to a bunch of additional germs. If she does not have the flu, she would probably get it after spending 4 hours in the waiting room. Then the drive, having nurses and doctors moving her, poking her, xrays, everything just upsets her. The more upset she gets the worse she gets. Going to the ER adds a lot of risks and stress that we really try hard to avoid.

Tim and I were not sure what to do. We know she needs medication. We know if she does not get medication that most likely she will get sicker. However, we also know that if she is exposed to the germs in the hospital she will most likely get sicker. Either way we looked at it there was just no good answer.

I called Maxim (Casey’s nursing provider). I told them what was going on and asked if they had any other options/ideas. I was so happy that I called. Maxim suggested we get a mobile unit to come to Casey. How perfect! She can get the xray that her doctor wants, we don’t have to put her in the car, we don’t have to expose her to additional germs, this idea is wonderful.

After a few phone calls the unit was in route. The company is based out of San Antonio but they server this area. For anyone that wants to know more the company is called AIS. It was about 2 hours after our initial call that the tech arrived. He wheeled in a little box on a frame. It only took him a minute to set up and get the xray of Casey’s chest. Then he took the film to his car. He had the front passenger seat converted to a workstation. He was able to load the film, show it to me, and send it off for the doctor to review.

The tech told me it would be about an hour for the film to be reviewed and the report to be sent to Maxim and Casey’s doctor. It ended up being just over 1 hour. Casey’s pulmonologist just called. He is calling in the antibiotic now. We should have her medicine in hand very soon. I hope this is a fast acting one. She has been so upset and so uncomfortable. I will post later this week with updates on how she responds. She sees her pulmonologist on Friday morning (she had this appointment already- a normal checkup).