It has been a long, rough few weeks around here.  One of our night nurses that was working 5 nights a week was not working out.  Early May we decided to let her go.  The agency we use sent out a couple of nurses, but none that worked out.  Luckily our other night nurse has been picking up an extra night each week.  That still leaves me with 4 nights a week that I am up all night with Casey.  I wish she was a kid that I could just sleep in her room and be there if she needs me, but she really needs someone awake all night.  Between suctioning, medicine, her food, diapers, oxygen, positioning and occasional breathing treatments she keeps me busy all night.  I usually drag Tim out of bed around 6 and he takes her until the day nurse comes in at 8.

Used to I would sleep from 6-10:30ish after a night shift and I would be okay.  Since I have had to do so many lately 10:30 has moved to 12:30 then as late as 1-1:30 on a lot of days.  My immune system is very weak when I am not sleeping well too.  I started to get sick mid-late May.  The doctor told me it was just a respiratory infection, gave me a round of antibiotics and sent me on my way.  When I was not better after 2 weeks I went back and they gave me another antibiotic and added an inhaler.  A couple days later I was feeling even worse so they sent me for a chest xray.  As luck would have it, I ended up with pneumonia.  Not walking pneumonia, the full pneumonia.

I have been miserable!!!  I finally got a few good nights in this week and yesterday was the first day I actually got out and didn’t cancel everything on my calendar.  Poor Casey has missed so much.  I have canceled/rescheduled every appointment, every activity, everything for the past 5 weeks now. 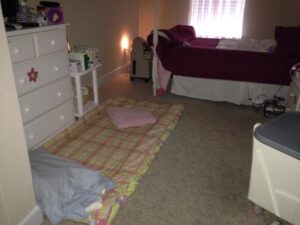 Our close friends had their baby last week.  The plan was that we would keep their daughter, Casey’s “sister”, while they were in the hospital.  Casey and Sam were both so excited about their slumber party.  I got the room ready and took a nap, hoping to feel better by the time I got up.  Casey was looking forward to having Sam come over all day.  If you talked about her slumber party she would get all excited.  The doctor called with the xray results late that afternoon.  I talked to my friend and we all agreed, especially with the baby, that it would be best to postpone the slumber party.  Casey was bummed, but luckily she is pretty forgiving.  I promised she could still have her slumber party, but it will just have to be this summer sometime.  I am sure with the new baby that Sam’s mom will be more than happy to have us take her for a night and give them a little break. 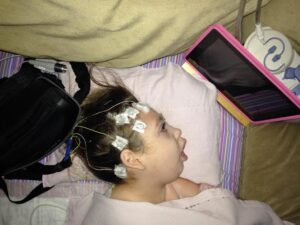 Casey is wrapping up a 72 hour Video EEG right now.  Someone came out to the house Tuesday morning and got her all wired up.  Her head is covered in electrodes.  They setup a video camera in our living room and another in her room.  It’s great that we can do this at home and don’t have to check in to the hospital.  Casey is not a fan of the electrodes, but she is doing the best she can to tolerate them.  They come early tomorrow morning to take them off and pack up all the equipment. 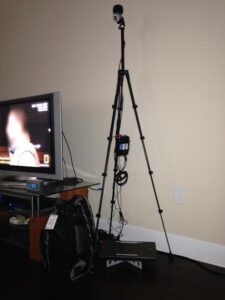 Casey has had more seizures lately and her
seizures are changing too.  Part may be just her growing, part may be that she is starting to show early signs of puberty, part may even be the crazy weather we have seen lately.  So many things can effect her seizures.  We hope that the doctors are able to get some good information from this test and that we can get a better plan for moving forward.

We have a few routine appointments over the next few weeks for Casey (many that should have happened over the recent weeks but were rescheduled).  We also have a new nurse that started last night.  I will be up training her this week and hopefully by this time next week I can get a little more sleep.  She is only taking 3 nights, so we are still on the hunt for a nurse to pick up the other 2.  I am very hopeful that this one will work out.  Please keep your fingers crossed that she is a good fit and picks up on Casey’s need quickly.  I am ready to get back to our normal schedules and routines- especially the sleeping at night part.