There is a group here in town called sMiles 4 Sammy. They are the group we have partnered with the past couple of years to host the special angel ornament event and they do a lot for families like ours. Their annual fundraiser was last weekend. They had an auction on Friday night at their high school’s football scrimmage. Then on Saturday they had a 5K. The weather turned out perfect; we were a little worried it may get rained out.

The founder of the organization reached out to us, as well as the other families they helped over the year, and we were special guests at the 5K. They had an area where they had framed pictures and stories for all of kids that they serve, and a special list to honor those that have passed. 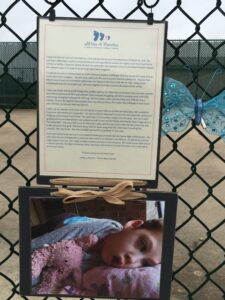 We had just gotten our t shirts made for Casey’s Circle. We and some of our friends (and Casey’s friends) decided to wear our shirts to the race as ‘Team Casey”. When we first got there I knew Casey’s picture and story were going to be hanging. I had to take a few deep breaths and prepare myself. I was worried I was going to get a little emotional, but I kept it together. The tribute to all of the kids was beautiful and I was honored that they included Casey.

Mornings are still really hard for me, there isn’t a moment Casey is not on my mind. It’s nice to have special things to do to honor her and to keep her memory and spirit alive. We are looking forward to doing the 5K again next year.

On Thursday of last year I shared Casey’s story as part of a webinar series for Neotech. This was only my second time telling her story with an ending. I ended up going over on time and had to rush the end a little, but it kind of helped. I was rushing and didn’t get a chance to get to worked up. The first time I told it I had all the time I wanted/needed and the last 6 months were hard to share. I will keep telling her story to anyone that will listen. She taught us all so much and touched so many lives. There are still countless lessons to be learned from Casey.

If you want to see the webinar, it is free to watch and will be online through June. If you need a CEU credit, there is an option to get one after watching as well.

We are working hard on setting up some events for Casey’s Circle. We did get our nonprofit status, so that is pretty exciting. Be sure to check out the new site if you have not already. It will be were we host tools, resources, and general special needs content as well as events and future CEUs. We will continue to use CaseyBarnes.org as our personal blog to share her memory and our lives.