Disclaimer:
This post is for those that like to read about science and medicine and want to know more about what is going on with Casey medically- as opposed to our normal social or general updates.  If you like to read the medical stuff, read on.  If you are bored with this type of detail you may want to skip this post.

Many of you have heard me joke that we add at least 1 new diagnosis every 6 months and at least 1 new specialist every year.  While I say it jokingly, it really is true.  Today’s appointment was one of these instances.

Earlier this year Casey had a CT scan to look at her cholesteotoma, but they were also looking at an odd dent that we noticed along Casey’s skull.  When we saw the ENT to follow up on the ear issues they didn’t really have much to offer in regards to the dent readings in the scan.  We have been trying to get in to see Casey’s physical medicine doctor for a few months now.  Life keeps happening and we have had to reschedule a few times, but we finally went and talked to him this morning.

He explained the dent and told us what it means moving forward.  Basically the skull has fissures that allow the skull to grow in all directions as the brain grows.  When Casey was born she had a lot of necrosis throughout her brain.  The lack of oxygen caused Casey’s brain to swell, much like a sprained ankle would.  As it swelled against the skull parts of the brain started to die.  This is very common with brain injuries.  After the swelling goes down doctors use MRIs and other images to determine the extent of the damage.  For Casey the damage was severe and global (affecting all areas of her brain).  Some brain cells will regrow on their own, and we helped Casey as much as we could with treatments like stem cells, hyperbaric oxygen therapy, etc.   While some of Casey’s cells did regrow, she lost a lot and all of her medical complications are a result of that part of her brain not being healthy/complete.  This is something we have known since very early on.  We are now learning some of the long term effects of this type of injury/damage.

As Casey grew there was a lot of empty space in skull.  The ventricals that come in from the spine and feed the brain stem saw the extra space and spread out if you will.  In some kids the ventricals swell or become enlarged with fluids and if there is not extra space in the skull the fluids can cause pressure against the skull and lead to damage.  For these kids they are diagnoses with Hydrocephalyis and typically they need a shunt placed in their brain to drain the fluid and relieve the pressure.  This is NOT what we are seeing with Casey.  Casey has the much lesser severe side of an enlarged ventrical that the doctor referred to as Ventriculomegaly.  Since there is extra space in Casey’s skull and the enlarged ventricals are not causing additional complications we simply make note of it, but there is no treatment needed.  This has likely been something that Casey has had since very early on, but this was the first time someone really went over it with us since it was identified in her recent CT scan. 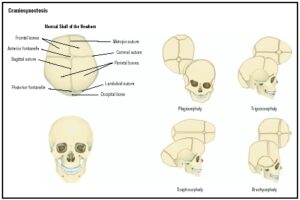 Ventriculomegaly does not explain her dent though.  The dent was actually explained as Craniosynostosis.  Again, since there was extra space in Casey’s skull her brain did not trigger the skull to grow evenly in all directions.  Casey’s skull has grown lengthwise as her brain has developed, but the width has stayed stationary.  The lack of growth along the inactive fissures led to the fissures fussing along the base of her skull.  Most likely these fissures fused a long time ago.  All of Casey’s recent growth spurts have led to the unfused fissures to grow as they should, but have made the dent along the fused fissures noticeable.  The craniosynostosis not only explains her long thin head shape, but it also explains a few other things.  Casey’s pallet is very high and narrow, and has gotten more so over time.  As Casey has grown the facial bones, such as her pallet, have moved into the extra space in her skull.  It stands to reason that Casey’s chronic ear infections and the cholesteotoma are also very likely related to how her skull and features have grown and shaped around the extra space, in particular the eustachian tubes.

The doctor told us that in some cases patients follow up with a neurosurgeon that can reshape the skull and/or the deformed growths.  I told him that there is nothing that anyone could do that would be worth the risk of brain surgery for Casey.  He quickly and strongly agreed that the surgery path does not make sense for Casey.  Much like the Ventriculomegaly, the Craniosynostosis is something that we are now aware of, it has been here for likely a very long, and there is no treatment necessary.

So we have 2 new diagnosis, newly labeled even though they are not new issues with Casey.  Luckily these do not include a new specialist.  Heck, these don’t even include a treatment plan- just a little education.

We talked about another possible diagnosis to add to Casey’s list.   This one is not actually added to the list yet, but something for us to examine further.  Casey has always had an issue where she can go from relaxed and happy to totally out of control in seconds.  Sometimes we think this may be a result of pain, sometimes we have contributed this to respiratory distress, and other times we have been left scratching our heads as we have no clue what triggered it and nothing we do seems to help get her to calm down.  When she was younger we had her on some anti-anxiety medications that are often used to help treat seizures and hi tone as well.  While this medicine did help keep her relaxed, she was too relaxed.  Casey slept all the time.  We eventually took her off of this medication.  When she had her J tube surgery in 2013 the doctors added a similar drug when Casey was not responding to pain medications after the surgery.  The first few days on the new drug were great, but after a few days she started sleeping all the time again.  We could not wake her up at all.  We ended up taking her off of that drug and with the help of her neuro we found a “cousin drug” that did not have the same sedating side effect.  We have used it for about 2 years now and it has helped a lot.  We use it at night to take the edge off and help her get good sleep.  We also use it on occasion when she has her freak outs that don’t seem to respond to any other treatment.

We told him about how we use this drug and that it really is the only thing that helps Casey stayed relaxed enough to not cause further contractions and joint issues from her freak outs.  The doctor talked to us about Dysautonomia.  He said many brain injury patients have this and it effects their fight or flight reflexes in a very dramatic way.  These patients will go from calm to completely freaked out quickly- much like we see with Casey.  Again, some of these episodes with Casey are likely pain and/or respiratory related, but I think it’s very possible some may not.  He went on to talk about some of the other triggers that he sees with dysautonomia episodes.  In many cases they will see elevated heart rates, increased blood pressure, GI issues/reflux, extreme sweating, and many other things.  We have been dealing with body odor and odd sweating with Casey for many years.  We originally thought the body odor was possibly early puberty, but many years ago all we saw was the BO and she didn’t have other puberty symptoms.  She does now, but for many years it was just the BO.  The doctor went on to talk about how this condition is deep rooted in the brain and is not a learned behavior, but really a reflex.  Casey is missing her gag, suck, swallow and blink reflex.  When I look at the big picture of everything that he told me about dysautonomia I am very intreged and want to learn more.

Casey did not get the 3rd diagnosis, dysautonomia, added today.  We are going to do some of our own research and talk with her neuro in a few weeks when we go in to discuss the recent EEG.  It’s possible that this is something Casey has, and it may explain a few things.  On the other hand, it may not.  Tim and I have some homework/research to do and I am sure that will lead to many questions to review with her doctors.

On the puberty topic, we are adding a new specialist later this month.  In addition to the BO, we are seeing many other symptoms now as well.  Earlier this year we had a care conference with many of Casey’s doctors.  When we brought up our puberty concerns they told us about a specialists that treats complex kids like Casey.  We are looking forward to talking to her and getting a better plan in place for the day that we know is coming soon.  We really worry about complications that may come with full puberty.  We are already seeing increased seizures that may be related, but if Casey has cramps and other pains associated, or if she is at risk for infections and other issues we need to be aware and ready.

We have 2, possibly 3 new diagnosis and a new specialists on tap for June.  I hope that covers us for a while now.  We’ve filled our quota 🙂